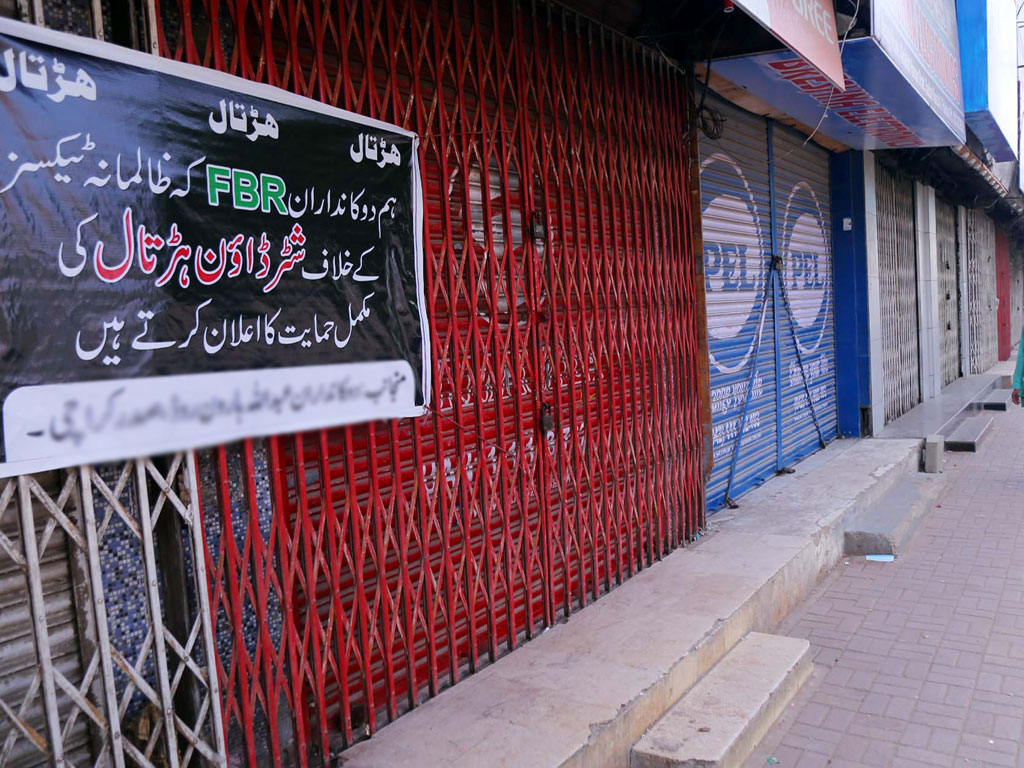 Traders have refused to meet with the Federal Board of Revenue (FBR) team to negotiate and resolve their concerns with respect to mandatory documentation, registration and use of computerised national identity cards (CNICs) by unregistered traders, according to the Chairman of All Pakistan Anjuman-i-Tajiraan Ajmal Baloch. The government's objective in insisting that there will be no backing off on these matters has the salutary objective of bringing the informal economy, estimated at about 50 percent of the formal economy, into the tax net - an objective that is supported not only by all other stakeholders, barring those affected, but also by previous administrations who failed to follow through with their commitment subsequent to strike action by the traders. That threat has resurfaced with Baloch stating that "there would be no compromise on the CNIC condition and we will show our power on 7 October." Prime Minister Imran Khan and Chairman FBR Shabbar Zaidi have publicly and repeatedly declared that there will be no withdrawal of the CNIC condition though there may be in terms of the tax rate applied.

The projected FBR revenue target of 5.5 trillion rupees for the current year was termed unrealistic to start off with for two broad reasons: (i) the shortfall in FBR tax collection target (revised downward a number of times during the year) from what was projected in the budget documents for last year was 321 billion rupees. Thus the budget documents gave the revised figure at 4.150 trillion rupees while the recently released data for federal government and fiscal operations for last year gave FBR collections at 3.829 trillion rupees. Thus the base projections used to negotiate with the International Monetary Fund are off by a little over 300 billion rupees and therefore the burden to enhance FBR revenue by 1.7 trillion rupees, a rise that the country has never been able to achieve in the past, is clearly unrealistic; and (ii) if one considers that the growth rate is projected at no more than 2.4 percent in the current year, the budgeted rise in revenue is all the more unrealistic. For Adviser to the Prime Minister on Finance to claim that growth will be around 3 percent is inexplicable given that contractionary fiscal and monetary policies are further choking the growth rate.

Revenue generation, be it from tax or non-tax sources, would therefore not be sufficient to meet the country's needs and a reduction in expenditure would be required. So far the government has not considered this as a viable option with current expenditure projected to rise to 7 trillion rupees in the current year which would be higher by at least 2 trillion rupees than what has been budgeted given that the revised estimates for current expenditure for last year as noted in the budget documents was 5.589 trillion rupees while the actual figure was 7 trillion rupees. If past precedence is anything to go by the government is likely to slash Public Sector Development programme (PSDP). Critics of the government suspect that unlike in previous years when Benazir Income Support Programme and the Prime Minister's signature social sector (Ehsaas) programme were placed under PSDP or development expenditure outside PSDP perhaps placing it under current expenditure may provide the economic team the rationale to slash it as required, however one doubts if the Prime Minister would accept this.

To conclude, there is a need to revisit the budget expenditure and revenue targets for the current year which would necessitate a framework designed to minimize the negative impact on the people to ensure that the IMF programme reaches its logical conclusion.